As my son’s high school hockey career comes to a close, having played his last regular season game last night, I take this opportunity to notice the character development that so many years of team play has taught Josh.  He has always worked hard in the sports he plays: soccer, hockey and track.  He is not the most gifted athlete, but that has never stopped him from competing with the best athletes he can find and doing his best in every game.

But more important are the things Josh does that will never show up in a score sheet.  In this, his senior year, he was named Alternate Captain, and he has taken that leadership role very seriously.  Many parents of freshmen players have kindly expressed their gratitude to me for the mentoring that Josh has done for their young players.  He dutifully keeps up his hockey team’s Facebook page and always gives a shout out to the goalies and other players who did something special each game, despite having only won 1 game this year.

Indeed, in his 4 years of high school hockey, his teams have only won 6 games, and unfortunately, Josh had the flu and was unable to play in the one game that his team won this year. Yet, that has never stopped him from encouraging his teammates, and showing up for practice every day to work on improving his skills.

Until last night, it bothered me that Josh was always the last one off the ice, since he is frequently running late. But since it was his last regular season game, I watched him more carefully and I finally realized why this was the case.  In every game, Josh has made sure that he was the last person to shake the ref’s hand.  He did so again last night. 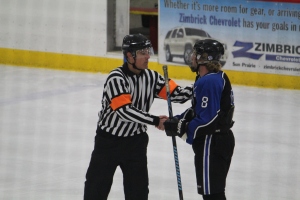 This small gesture demonstrates that Josh has learned the important value of sportsmanship.  I suspect the refs appreciate it as well. As his father, it filled my heart in a way that only a parent can truly understand.

The next few months will set Josh on a path that has not yet been determined as we wait for the responses to his college applications to come in.  But when I saw this handshake, I realized that my son will do well in whatever endeavor he chooses because he knows that through respect for others, and holding his head high even after yet another loss, nothing can stop him from fulfilling his dream of using his head and heart to make the world a better place.

2 thoughts on “The Last Handshake of the Game”