Systems change usually involves many  steps and can take many years. In some cases, such as battling racism, the job is never really completely done, as progress is usually incremental. But occasionally, my work allows me to celebrate completing a multi-step complex job and one week ago, I could indeed say, “Mission accomplished!”

About 4 years ago, I was elected as Chair of the Goose Lake Watershed District (GLWD), which has public authority to preserve and protect Goose Lake, located in Adams County, Wisconsin, in what is known as the Central Sands area of the state, made famous by the classic environmental text, Aldo Leopold’s, Sand County Almanac, which I highly recommend to those who have yet to read it. I have read it multiple times and learn something every time I read it.

While Goose Lake is pristine in many ways, hosting a wide range of both water and land wildlife and diverse botanical features, about 40 years ago, someone who developed about 20 vacation homes across from a small island on the lake, known as Gilligan’s Island, built a boardwalk and bridge to the island. While it was charming in many ways, as nobody had maintained this wooden structure for 40 years, it was falling apart and had become quite dangerous, with broken boards and protruding rusty nails.

When I became chair, I was determined to either remove or repair the bridge. However, I quickly found out that the original developer who sold the parcels on that section of the lake and built the bridge also attached joint ownership of the island to each property owner’s deed. Initially, the GLWD explored the possibility of buying the island in order to deal with the dilapidated bridge. However, the deeds were also restricted in a way that prevented property owners from selling off only their island ownership.

The GLWD recognized that we were dealing with our neighbors, so antagonizing them was simply never an option. Instead, we decided that we would regularly hold public meetings and send written updates on this project to property owners over a period of about 2 years. We always welcomed calls and e-mails, and what became apparent from these various contacts is that the property owners wanted the GLWD to solve this problem, despite the legal restrictions around property ownership.

At GLWD’s last Annual Meeting, we approved issuing a request for proposals to remove the bridge. We determined that since we had authority over the lake, we could remove it due to its dangerous condition. We found a good contractor whom we could afford, and when I spoke with him, I let him know that we would continue to inform the property owners every step of the way, and if there were any concerns from them, we would have to resolve them first. We also included a clause in the contract that required the contractor to avoid damaging any neighboring property.

Once a demolition date was set we notified property owners providing them with 10 days to notify me of any concerns. Hearing none, I informed the contractor that he could proceed. Last week, after a crew of 3 worked for 3 days, the bridge was finally removed, and Goose Lake was returned to its natural state. They did an excellent job and I have approved payment to the contractor. 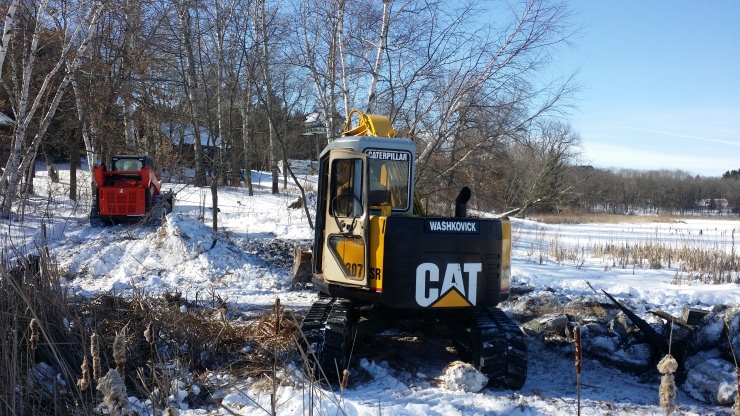 While much of my work involves building bridges, in this case, it was necessary to remove one. I am really looking forward to spring when the ice melts and we can all see the lake return to its natural state without the dangerous bridge. Occasionally, my systems change work, allows me to say, “Mission accomplished!” Although it took a few years, it is a very satisfying feeling.